So they did it! We have a official 10-way CF night world record and also an unofficial 4-way sequential night record as well! The sequential was done by holding the 4-way base and switching the 3-row divers in their slots. Congratulations to: 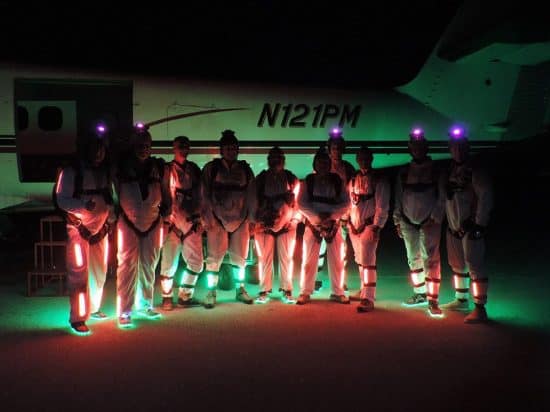 26 November ’17, evening
About ten CRW-dogs currently enjoy their dinner and the thought that their name may be linked to the next night record. The tension rises.

While Europe was lying on one ear our CRW brothers did their best in flying that big official night record. The 22-way flew… but unfortunately with one wrong grip  😥
Still the team is in high spirits and will give it another go tonight. Too bad some have to leave, so the group and the record attempt will be much smaller. Good luck tonight guys, fly that official record!

25 November ’17, a short noon note
This morning we started with the memorial skydive for Reger. As it seems to be, every ash dive has it’s own twist. On opening our pilot, Mike, had two broken lines on his main and needed to use his reserve. Although the 31-way did not build completely the in air ceremony could be performed. Reger, fly free…
On the second jump of today, the 9-way base for tonight practiced while the rest of us could enjoy the Florida Sun, which we had to miss the last two days. Unfortunately Micke had to leave to get his flight to home, have a save flight Micke!
We are now with 24 participants to fly the official night record. Later tonight I hope to release the good news of a successful jump.

24 November ’17
Unfortunately day two also past with no jumps to log.  The group did train to be totally ready for tomorrow. The jumps are prepared, 09:00 circle up, and for the first jump Reger his memorial skydive is planned. After that, one “fun jump” is scheduled before the team will start with two training jumps. Later at night there are three night jumps planned, so all eyes will be aimed at Lake Wales, fly that record guys! Go, Go, Go.

Day one of the Vampire boogie was a rainy day which ended up in no jumps at all. 🙁
For tomorrow we have high hopes and will circle up on 09:00 hours. A bit early for us Vampires and we even have some serious “fun jumps” on the menu for tomorrow! Also Micke Andresson from Sweden and now coach of the Qatar rotation team, will be joining us. So Europe will be represented by two men.

Introduction
The goal is flying night crew with records attempts for those who qualify in the day jumps. Circle up 2 pm, skydive till midnight. Record to break is the 27-way, flown earlier this year at the same drop zone.
Also planned is the Bob Reger memorial skydive.

Pasi Pirttikoski will be the only crEUw member participating in this event. We will hold track of Pasi and his adventures in sun shine State Florida.
Early on this weel Pasi visited DZ Deland to meetup with the Qatar demo team, who were in full training, preparing their yearly National Demo with night exhibition as well.

Thank you Pasi for your first update, have fun and save moon-dives!